Yuletide greetings have come early for iOS jailbreak lovers round the world with the release of a now confirmed untethered jailbreak for Apple’s new mobile operating system iOS 7. For those who are quite uncertain about what the term “jailbreaking” is all about, jailbreaking can be referred to as “hacking” an Apple device such as an iPhone and iPad, so that users can download apps, extensions and themes that are not available through the official Apple App Store. On one side, this allows the user to have more control on the device in question while pushing it to its limits with new theme interfaces and extensions that enable interesting features such as Bluetooth file sharing, WiFi tethering and even game console emulation. But another side of jailbreaking is the ability for mobile application  “piracy” where users could download and install free “cracked apps” on their mobile devices.

Technically speaking, jailbreaking an iPhone or iPad is NOT illegal. But Apple has warned that the practice “can violate the warranty”. It is worthy to also note that jailbreaking your device eliminates security layers designed to protect your personal information and your iOS device which could lead to hackers stealing your personal information, damage your device, attack your network, or introduce malware, spyware or viruses. Finally you should know that unauthorized modification of iOS is a violation of the iOS end-user software license agreement which gives Apple the full right to deny service for an iPhone, iPad, or iPod touch that has installed any unauthorized software. But all these don’t scare a LOT of people… one bit.

The evasi0n7 jailbreak, developed by a group known as Evad3rs, claims to work on an iPhone, iPad or iPod running iOS 7.0 through to 7.0.4. It takes 5 minutes of your dear time to install via a USB cable connecting the user’s device to a computer running Windows, Mac OS X or Linux. As the usual risk of data loss and several other complications, the need to backup your data cannot be overemphasized. As with the early versions of these hack tools, it has been confirmed that several hacks and extensions available on the Cydia store would not work properly. Thus, the probability of instability of the device’s operating system has a greater probability at this stage. Always backup your phone before installing new tweaks from Cydia as your iPhone could be stuck in the boot process,” warned evad3rs. “The situation will improve as developers will update their software.”

However, a number of tweaks do work, and thanks to iJailbreak, iPhonehacks.com and RedmondPie, here is a short list of confirmed working and not working tweaks. Please go through them carefully to decide if jailbreaking is okay for you at the moment.

So, when it comes to this matter of jailbreaking iOS 7, we are reminded that “good things come for those who wait.” Cydia is known as the jailbreaking community’s preferred app Store and until several of the commonly used tweaks are working perfectly, you might as well relax and enjoy the holiday; not just for what it is, but for the hope of more dependable updates.

But of course, if you do intend to get along with it, alongside the risks, you can get Evasion 7 here for Windows and here for Mac OSX.

We don’t know if there is anyone like us out there but whenever we update iOS to a new firmware, We have always secretly wished for and ultimately been pissed at the lack an important feature that usually makes things seem new and exciting with software such as operating systems: A COMPLETE VISUAL MAKEOVER!! 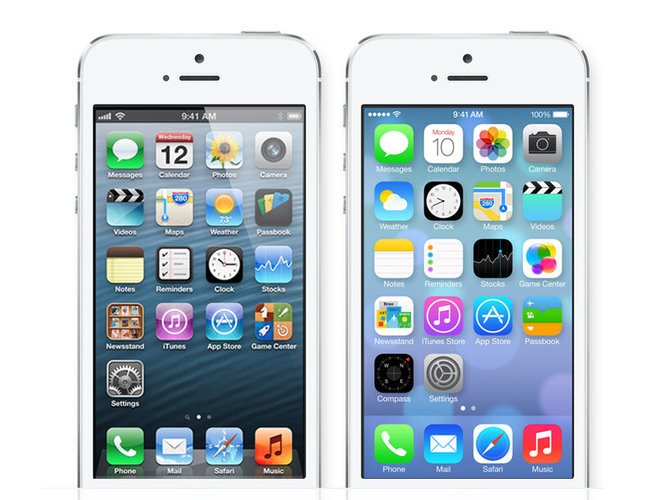 Microsoft Windows at one time used Windows 95 and then at the release of Windows XP, the new looking interface was a winner. Windows Aero was released with Windows Vista and has been a continued standard even with the newest Metro interface for Windows 8. It is true that functionality and stability are essential, uncompromisable qualities of good operating systems but nobody would complain if a good looking graphical user interface came along with it. Sure! Thanks to jailbreaking, Cydia allows us to make some color (and even complete) theme changes but something new had to come out some time from Apple at least some day-y-y-y! That being said, it’s not like Apple’s iOS actually looks ugly; but maintaining the same general outlook over more than 10 updates and over 5 versions would have to become more or less a tiring rhetoric, a trite expression or well… in plain English… rather boring.

Apple, finally releasing its beta version of iOS7 earlier this month for developers has finally showed us that their new update is none of that. Apple has finally worked at changing just about everything, but like the Windows 8 OS to which iOS 7 is now drawing comparisons, thanks to the bold colors and straight lines, it feels a little too much, too soon. But nevertheless, iOS 7 just for that, is welcome and iOS 7 would be released this fall. From previous experiences, beta versions of Apple software are bound to change a great deal before they get approved for consumer devices. So far so good though; iOS7 has been said to deliver pretty much what we already know about iOS and even more.

There’s a lot of new stuff to love about iOS7. There is now a Control Center which gives you quick access to the controls and apps you have been using. With just a single upward swipe on the screen, the Control Center can also turn toggle Wi-Fi, adjust screen brightness and start a flashlight.

The Multitasking app-switcher has also been completely revamped with new features. There is a new lock screen, a revisited notification Center, a super-charged Siri, a new, easily-accessed quick settings bar, and pretty much every app you can think of has been revamped and stripped down to its essence. There is the new AirDrop which allows near field communication between iOS devices around. Can somebody shout hallelujah to that? You can finally share photos, videos and contacts using Wi-Fi and Bluetooth – but with iOS devices.

At every level, iOS 7 is a slick revitalization, rejuvenation and resurrection of the core iOS experience. Even Safari gets a brand new look with a refreshed tab view and a unified search field. Safari can also suggest passwords for you but we sincerely wonder how much use that would be. The music and photo apps have also been revisited to make things more exciting and savvy. iOS 7 will not be compatible with iPhone 3gs as expected but will for the newer models inclusive of iPhone 4.

For those who may have seen a link to download the beta version and cannot wait to have a go at Apple’s latest makeup session would have to be careful. This version of iOS 7 is intended only for installation on development devices registered with Apple’s Developer Program and attempting to install this version of iOS in an unauthorized manner could put your device in an unusable state, which could necessitate an out of warranty repair. And even though there are posts out there that mention a possibility of downgrading to iOS 6, on our opinion, we would recommend you DO NOT do the upgrade till the final version is released; unless you are a part of the Apple Developer Program.